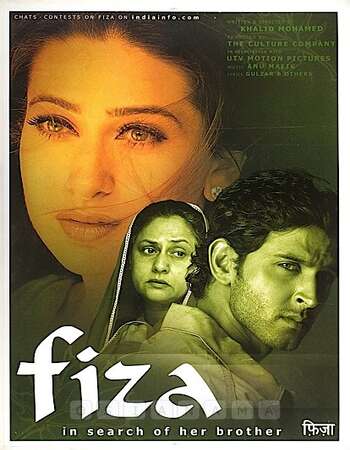 Plot: Six years after Fiza’s (Karisma Kapoor) brother, Aman (played by Hrithik Roshan) disappears during the 1993 Mumbai riots, she goes to look for him. When she does find him, to her horror she sees that he has joined a terrorist group. She forces him to come home, and he finally re-unites with their mother (played by Jaya Bachchan). However his allegiance and thoughts make him want to join the terrorist network, led by Murad Khan (Manoj Bajpai). A confrontation with two men who harass Fiza leads to Aman revealing his involvement with the terrorist network in front of his sister, mother and the police. His mother’s grief and disappointment eventually lead her to commit suicide. Fiza tries once more to find her brother, with the help of Anirudh (Bikram Saluja). Aman has been sent on a mission to kill two powerful politicians; when he does succeed in assassinating them, his own terrorist group tries to kill him. He escapes and Fiza follows him. They confront each other and with the police …